The Complete Thinker: The Marvelous Mind of G.K. Chesterton is available today!
Posted by Nancy C. Brown at 11:16 AM 1 comment: 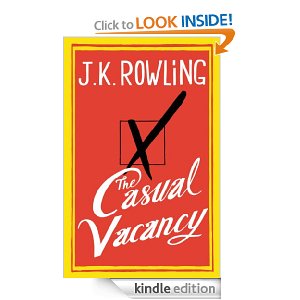 The Casual Vacancy, by J.K. Rowling is out.

It is receiving mixed reviews.

Since I've read it, and since I've gone out on a limb to explain and defend Harry Potter, I thought I'd share my thoughts on this book here.

If young people grew up gradually reading Harry Potter as the seven books came out, those young adults are now in college. Rowling's book, it could be said, is written for that level. If college is a time of complete freedom of speech--not worrying about offending anyone; discussions about bodily functions, and trying out every physical urge or inclination a person may have while suppressing his or her self-control, than this book works for that level. In other words, her language and the situations discussed are base. The book barely rises to the spiritual plane, although once a character longs for something bigger than herself. There is a funeral that takes place in a church. Beyond that, the characters are all operating at a very low level of existence. Everything they care about is base. Their minds are in the gutter. Not only is this book rated R, but it is probably rated X. If they made it into a movie, and depicted everything Rowling depicts, it would indeed be X rated.

But the question is, would college kids--or any of us-- get anything out of this book?

I've read some reviews that say the book has a good--and redeeming-- ending. That if you read all the way through, you care about the characters. I'm unconvinced this qualifies as making it a good book.

I also obtained the false impression from the description--and my knowledge that J.K. Rowling once belonged to the G.K. Chesterton Society in the UK--that this book might be a sort of modern day Napoleon of Notting Hill. Boy was I wrong. There is nothing Chestertonian about The Casual Vacancy.

My kindle edition is searchable. After a few dozen uses of the startlingly boring "f" word, I decided to count. Kindle says the word or variant occurs 214 times. I know there are places and homes and schools where this is the norm, but not my family, and not any place I frequent. After a few dozen times, the word fails to shock, and it just becomes a question of wondering why Rowling chose to use this word over and over and over. Did she think it would make this book more "real"? Or did she run out of other options? I'm not even sure the more common words like d*mn and h*ll are in this book. But f is there in spades.

Which brings the reader to the question: Why was this book written? What purpose can it serve?

The book is a tragedy, through and through. It is a sad, god-awful story, dead-tragic. There isn't enough at the end to say whether the characters have learned anything. You think, perhaps, some change has happened, but after lifetimes of horror and dirt, can people really change that much after one great tragedy--which some of them feel guilty about, but are they guilty enough to change? Rowling seems to think so. She wants to shock us into thinking so. But when 98.75% of the book is the tragedy, it's hard to feel convinced that the last 1.25% really redeems it all.

Here is a question regarding the book if you've read it: Would you ever want to read it again? My answer is a resounding no. I would never want to subject my mind and my imagination to this book ever again. I couldn't sleep for a week as it was, for thinking about the awful images that Rowling created and I read. A hundred times I wanted to put the book down and never finish it, but I'd read reviews that said the end justified the thing. I do not agree. The end does not justify the writing of such a tragic and awful book.

The sad thing is, I've defended Rowling as a Christian. I've believed her a sincere Christian. She quoted scripture in Harry Potter. She's dropped hints and I believed her. But the person who wrote The Casual Vacancy had to first imagine these scenes, and then descriptively write them down. And that kind of mind, thinking those kinds of thoughts, and using that kind of language, is really not the mind I thought of as J.K. Rowling.

Is this book the opposite of Harry Potter?

Harry Potter contained a cast of characters-- mostly good, but some evil. There was a battle, and in the end, good won.

The Casual Vacancy shows a cast of characters who are all bad. The one seemingly good character was killed off in the first scene, and later on, you discover his wife thought he was bad, too. Who or what is the good character in The Casual Vacancy? The good social worker, Kay, is conducting an affair and can't communicate with her daughter. And then when she's needed, she claims she's no longer on this particular case and can't act. So she's eliminated as a good character. Perhaps the rowing team as a group is the "good" in the book. But they sing a hellish song as their "theme song" and although Rowling says they don't understand the words, it's still a bad song. Struggle as I might, I can find no "good" characters in this book. The battle of good and evil is played out, every character against the world and each other, and evil wins. The anti-hero dies.

Although the work is what I might call an ensemble story, the main character, Krystal Weedon, is the tragic anti-hero. Except that she's foul-mouthed and easy. She's a product of her circumstances, trying to make her life a little better, but she can't. Her circumstances are what make up most of the story, explaining why she is the way she is, the choices she makes, and her ultimate choice of suicide is unjustifiable. But where is the redemption in suicide? Are we just supposed to learn our lesson, so that no other Krystals have to die? Will the stuck up Padfordians in town pull together out of their collective mud pit and now care about the poor Fieldians, whom they've despised throughout the story? It feels, at the end, like they might just as easily say like Scrooge: Thank goodness they've died, so they "decrease the surplus population."

Is J.K. Rowling, on the other hand, attempting to answer back all of the conservative Christian criticism of Harry Potter? For example, was she thinking that if anyone thought Harry Potter was bad for kids, she would show us a book that's truly bad?

Sadly, many children who have waited anxiously after reading Harry Potter are probably filling their minds with this filth if their parents aren't watchful. The Casual Vacancy is not by any means a book for children. I can't even recommend it to teens or adults. I find no redeeming merit in this story, which could have been told in another way, a way that wouldn't offend.

Was J.K. Rowling looking for popular acclaim? Did she want to be accepted as an adult fiction writer so badly she stooped to low levels to ensure her book would be valued by the New York Times? That, by the way, backfired, as the Times didn't like her book. One of the few occasions I've agreed with a Times review.

Unlike some reviewers, I cannot admire Rowling's "bravery" in writing this book. I did yearn, too, for just one character, just one! to stand up and do something right.

Obviously, The Casual Vacancy wasn't written for me. I had to actually look up some of the swear words and descriptors of private parts and other bad words to see what they meant. Thanks, JKR, for broadening my vulgar slang language vocabulary.

I live in a small town, too. But people in my town still save their swearing for bars and brawls. Sure there are affairs, neglect, and child abuse. But the majority of our citizens are living and working hard, trying to keep the faith, keep family times, get their kids educated, and celebrate the good times. We help our neighbors, and our neighbors help us. I think small towns are a lot more like where I live, than Pagford.

One wonders if J.K. Rowling even knows what real small town life is like. My faith in her is shaken. The Casual Vacancy will, I hope, go down as Rowling's forgotten book, if only she can write something better next time.

Or perhaps her seven-fold magnum opus has already been written, and there ends the imaginative gift. It would have been better for the world if the literary output had ended there, than Vacancy be birthed. And if Rowling needed to write this book for her own self preservation or whatever reason, how much better it would have been for her editor to bravely and gently say, "Let's put this aside, and you try again, all right?"

The Casual Vacancy, by J.K. Rowling. Not recommended. Offensive.